So, I was very lazy about putting out another guide in this series. I had things all ready to go for one about the Heavy Splatling, and then my computer crashed and I lost my draft. After that, I went and did what I always do when I'm pissed off or get discouraged: I went and cooled off with a couple rounds of Splatoon. I decided to try using some weapons that I had never tried out before, and came upon the rapid blaster. Trying it out, I was very skeptical, but to my surprise it's become one of my favourites to use for a turf war! So today I'll be going over the strengths and weaknesses of this very unloved weapon. 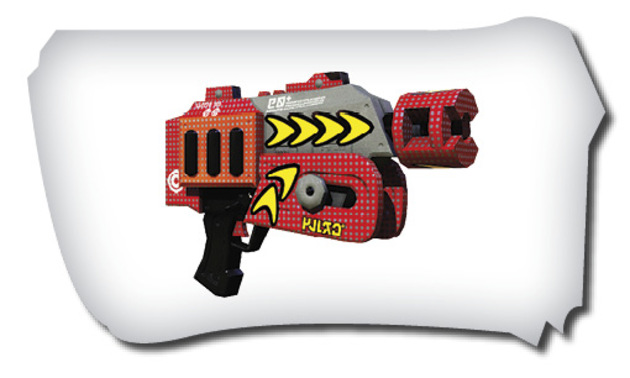 One of the greatest things that sets this blaster apart from all the others is it's range. The rapid blaster will easily outrange any other weapon of it's type, and some of the closer range normal shooters as well. It even outranges the Range Blaster, the blaster designed for better ranges, by a good amount of space. This single quality already puts you at a good advantage over other blasters, and makes you an avid threat for shorter ranged shooters, rollers, and maybe even a Squiffer or Bamboozler if you play your cards right.

The most obvious difference in the rapid blaster is right in it's name: the rapid firing capabilities that aren't seen in it's beefier short range brothers. The rapid blaster has a decent fire rate (for a blaster that is) that just balances out so it isn't too overpowered. You can expect maybe 2 shots every 1 and a half seconds, although this is just me roughly estimating. This can usually allow you to catch the shorter range chargers off guard quick enough so that they can be finished off before having time to react. This same principle will also apply to longer range shooters as well.

The Rapid Blaster will always splat in 2 direct shots, no matter how many damage ups you try to load on it. One slight disadvantage of this gun is that, when compared to the other weapons in it's grouping, the damage you get from the "spray" of your shots is significantly lower. Like, really low. It's worth it to put some damage ups on your gear to make this less of a problem, because you can present a much more serious threat if you can keep that splash damage high.

Like the gun I reviewed before this one, the L-3 Nozzlenose, many people say that this gun has serious coverage issues, and should be sentenced to be forever locked in ranked battle. I'm conflicted about how to respond to this one. It's no secret that pretty much all blasters have sub-average coverage capabilities. The rapid blaster makes up for this alot with it's fire rate, allowing you to spread turf quicker. If you play right, you can easily get 800p in a game with this gun. It also serves well in ranked battle, although it's best game mode is easily tower control. With extended range, you can easily hit multiple foes on the tower without fear of retaliation.

Now that I've gone over the gun itself, I'll get into the specific sets of the two variants that are released right now.


The standard Rapid Blaster. This gun comes in a set with ink mines and a bubbler special. In my opinion, this one is kind've stuck in a limbo of what it wants to be used for. Ink mines can help for tower control on occasion, and the bubbler is always nice to have around for that task too. It's definetely leaning more towards ranked battle, as ink mines and a bubbler have zero practical turf coverage uses.This thing probably holds it's own the best in splat zones, where it can effectively limit traffic in choke points with ink mines and provide decent team support with the bubbler.
The Rapid Blaster Deco is my preferred weapon set of the two available. It comes with suction bombs and the suction bomb rush special weapon. The little blurb about this weapon describes it as a great weapon for staving off over-aggressive foes. It fits this role perfectly, forcing opponents out of hiding with you powerful bomb and allowing you team to rush and take the offensive, with you leading the charge, tossing bombs everywhere with your bomb rush. It has great ability in turf war, with great coverage abilities. Ranked battle will also be a piece of cake, as your suction bombs are great for nailing the tower in tower control, and your bomb rush can help your team push forward in splat zones and rainmaker.
Closing thoughts

I think the lesson I really took away from this is that trying new things is always a good idea, and you should always be open minded in all ways of life.

Screw that life advice moral crap, the real lesson is that blasters are awesome >: ]​

A little too bare, seems lazily made IMO.
Fair enough. This weapon has been sitting in the back burner for me, so this will probably make me wanna use it. I'm a shooter kinda guy, but blasters can be an interesting change of pace.
Good.
Read more…
Top Bottom