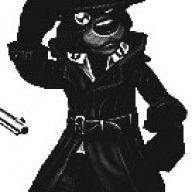 If you're from Miiverse and I know you, feel free to contact me. I'm currently active on an NSLUC Discord server & I can invite you there. Oct 31, 2017