To the slow music of the waves and the breeze, a young octopus slept by the shore, unaware of what would change her life forever.
The sea breeze cooled her cheeks as she lay quiet and still, her mind wandering a pleasant dream. She wore a quiet smile on her face. She didn't awaken until a soft touch caught her attention.

Lana was slow to wake, but when she did, she found a warm, familiar face; Elite soldier Rebekah Sasaki. Like an older sister, Rebekah had always supported her friend, even during tough situations, like their battles with Agent 3, where they were swatted like flies.

"Wha-" Before Lana could ask what was going on, Rebekah grabbed her hand and ran.

Inkopolis? Even with her missions, given out by the dastardly DJ Octavio, Lana had always wanted to see the surface, where some Octarians had already escaped. "But how are we going to get there?"

"I have a plan," Rebekah replied. "It seems like you fell asleep on Kaleka Beach, off Kahe Town...pretty far from Inkopolis, but we should be able to get there by commute."

"It looks peaceful," Lana observed. "Why is it unsafe?"

"There's an Octarian base on an island just off of here," Rebekah replied. "We should leave before they find us. Come on."

They kept running, eventually finding a public transit area. Lana was unfamiliar with the system, but Rebekah seemed to know some things about surface culture. She talked to the jellyfish at the counter in a language Lana couldn't understand; the creature nodded and spoke back, in a high-pitched voice despite presumably being male.

They entered the train station, looking around, when they found a strange, sickly-looking Octoling managing the front desk. Rebekah decided to talk to her.

"There's a sub leaving for Inkopolis Underground at 13, right?"

When the Octoling spoke, her voice was monotone and strangely distorted, as if coming from a bad radio signal, or an old video game, in contrast to the nervous, yet hospitable, jelly. "The only way from this area to Inkopolis is the Deep-Sea Metro system. You should see a sign indicating the location."

"Thank you," Rebekah said respectfully, then led Lana towards it. "This way."

Lana nodded vaguely and followed her curiously. The sea breeze began to brush against her face again, and she felt calm.
The sign pointing to the metro was in Inkling, the language Lana had seen Agent 3 write in before; however, Octarian lettering at the bottom made it clear to Lana that it said "Deep Sea Metro ^." Lana and Rebekah followed it to where a train sat, not yet moving. They climbed onto it and sat by a couple friendly-looking individuals, including a sea angel in a white dress, and an anemone in a varsity jacket with a purse on her lap; they didn't speak to them though, instead focused on conversing with each other. In fact, none of the passengers even seemed to notice them. Strange.

Rebekah seemed nervous, although Lana was just curious. She waved her hand in front of a moon jelly, who continued to talk with its betta fish friend and not notice. Lana looked to the side, and a small creature entered, the first to notice her; it squirmed up to her and looked up at her face. "Ah, welcome! I presume it's your first time riding with us?"

Lana nodded. If the creature had a mouth, it would probably smile a bit.

"My name is C.Q. Cumber. The previous owner of the Metro is not here, but I still have a couple CQ-80s on me," it said. "Also, be careful. You will stop at many stations; many of them are dangerous. I could not do anything about it. but many stations will require you to bear arms. Being Octolings, I trust you have done that before?"

"Then you should be alright traveling to Inkopolis through this method?"

CQ left the room for a bit. Lana and Rebekah looked at each other. 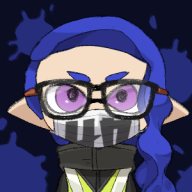 please write more
You must log in or register to reply here.