General Guide Every Weird Place You Can Land On in Every Splatoon 2 Map (Edited Often!)

Here’s some wacky stuff you can do to start squid parties in Regular Battles or impress your friends in Private Battles! Have fun! SPOILER: glitches and stuff!
(Still a work in progress, I add to it as I go.)
Last edited: Jan 14, 2022
T

To get up here you have to go up the ramp right next to it, ink the ground straight across from the lamp, swim through the ink and jump onto the lamp. Be sure to time it right! Otherwise it may take a few tries to get up here. 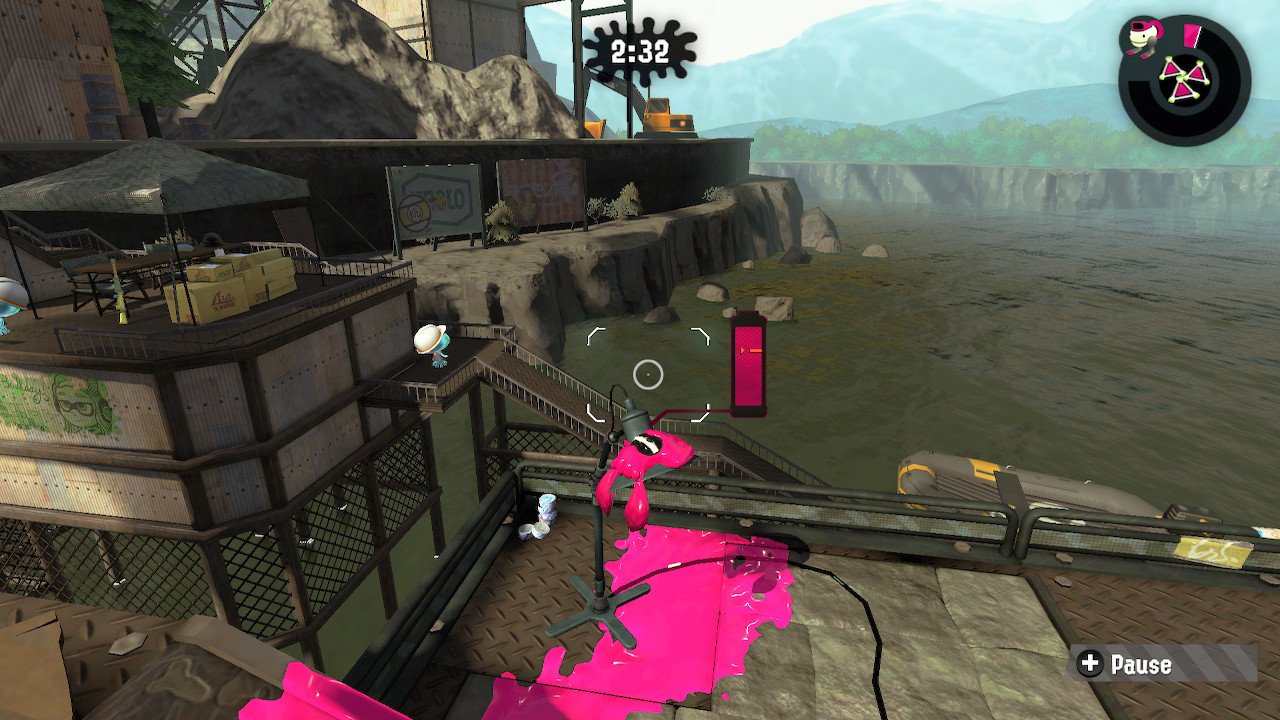 Basically in order to get up here, you can swim though the respawn point, time the jump just right, and you should be able to land on the cart here. 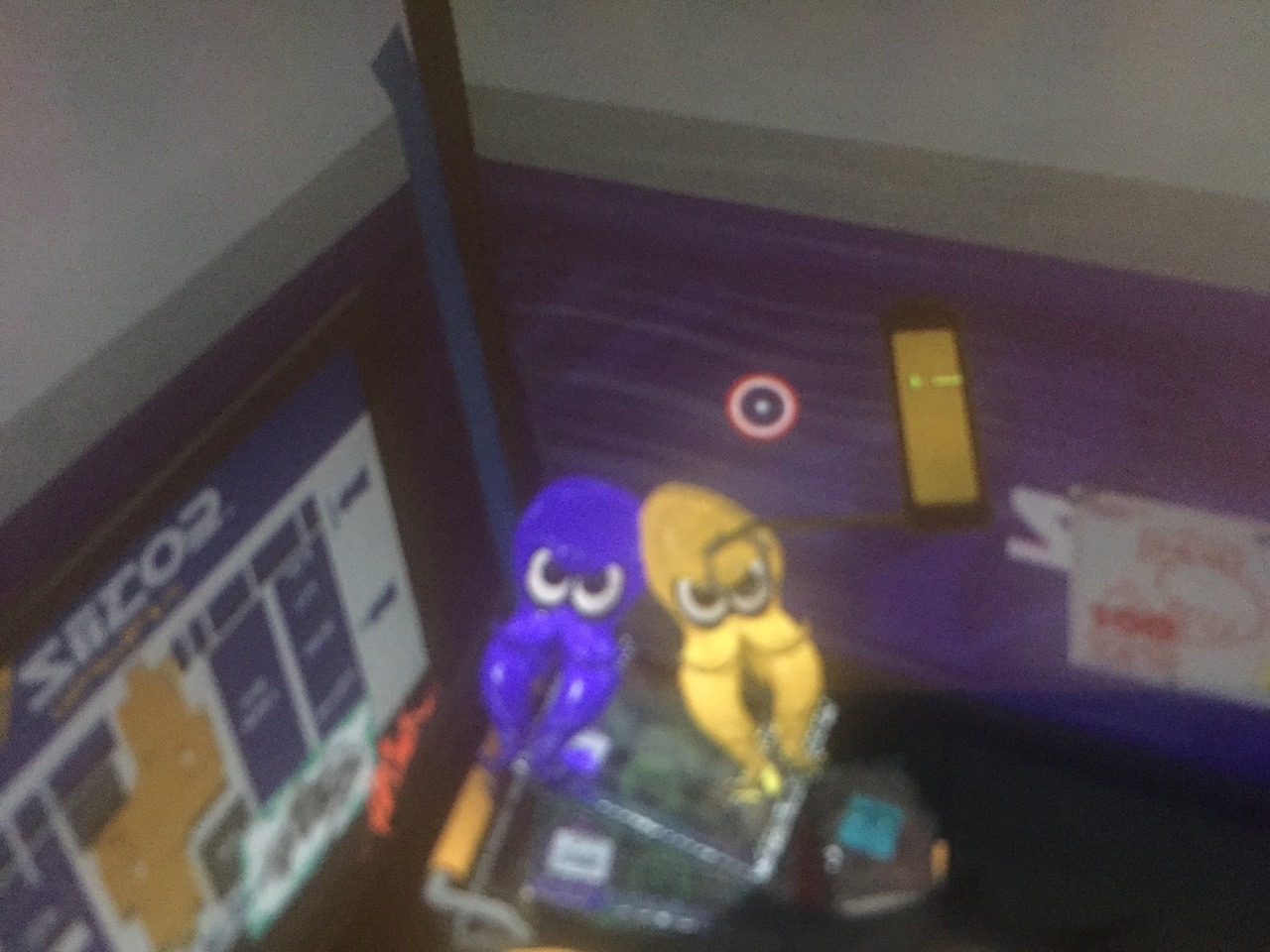 Back to Piranha Pit for this one! You’re going to want to jump up onto the edge of the chair closest to the lamp (it may be helpful if you jump from the first chair to the desk to the chair by the lamp). Once you’re on the very edge of the top of the chair, hold down (B) while moving your character towards the lamp to give you some extra air time. With the right timing you should land on the top of the lamp! 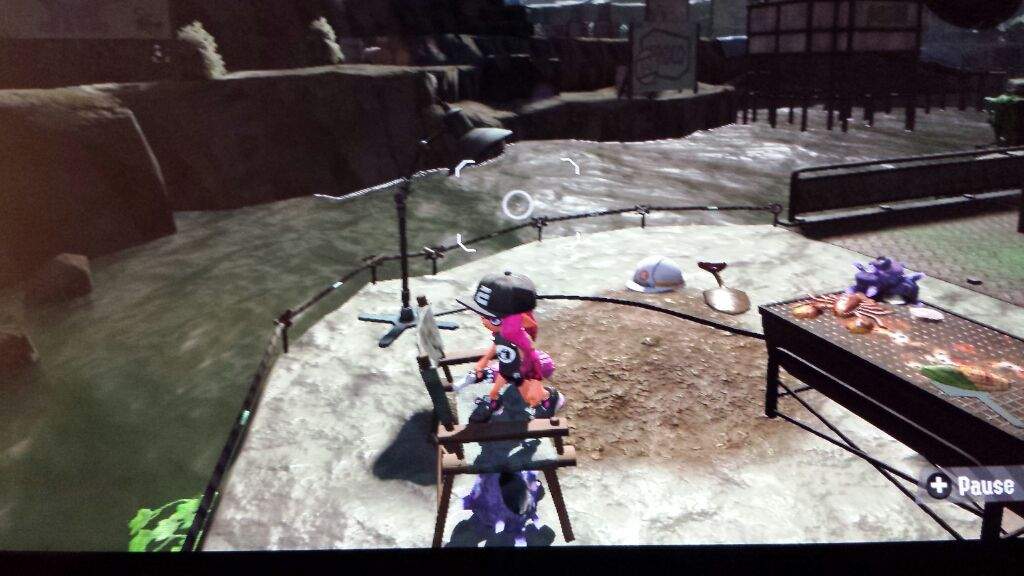 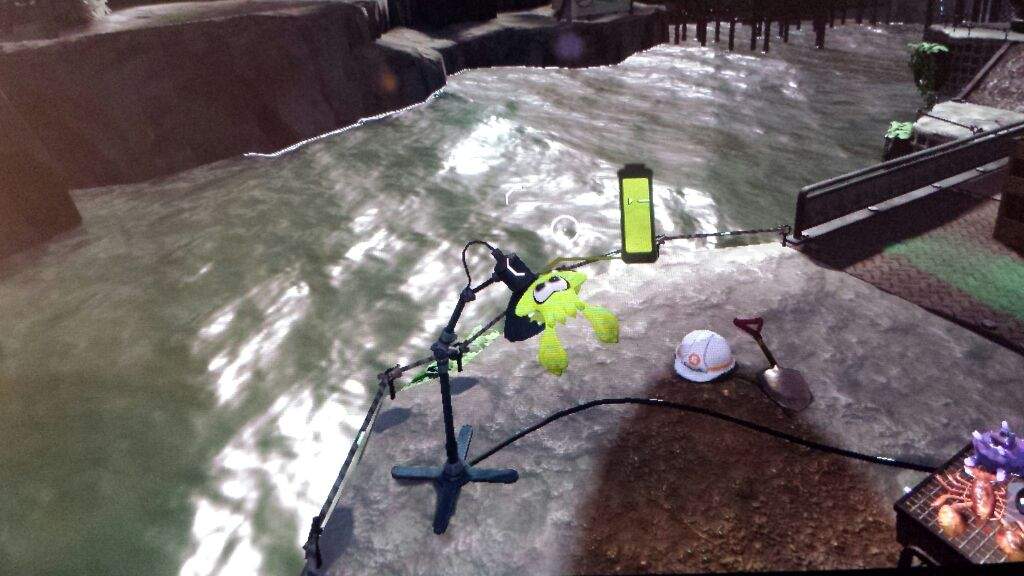 This one is super tricky, and you’re gonna need a little help from someone on the enemy team.
First, you are going to need to equip a weapon with Ink Armor as its special, and have the person helping you on the other team equip a weapon with Suction Bombs as the sub. Then, you need to charge up your special. Have the enemy team player throw a suction bomb at the wall just behind and below the lifeboat as you equip the your Ink Armor. Swim-climb up to the top of the wall as the Suction Bomb prepares to explode, and then as you reach the top of the wall, provided the timing is right, the Suction Bomb should explode, breaking your Ink Armor and giving you some serious air In the process. You’re going to want to jump right as that bomb explodes and your armor breaks. Then, just try to aim for the top of the life boat! This glitch, still unpatched as far as I am aware, is difficult to achieve- although I have achieved it in a Private Battle with a bunch of random players I didn’t know that were in my friends list at the time. Long story short, it will almost definitely take several tries (although congrats if you got it on your first try, you have both impressed me and proved me wrong and I am not ashamed to admit it). Recommended that you do this in a Private Battle with friends. If there are others on your team, they can Super Jump right to you! Note: A lot of out of bounds glitches can be accomplished using bombs and ink armor due to the way he ink armor makes you bounce and move a bit when it is broken especially by a bomb. Found a wall that cant be inked or climbed? Ink Armor + Bomb explosion = “wheeeeee!” 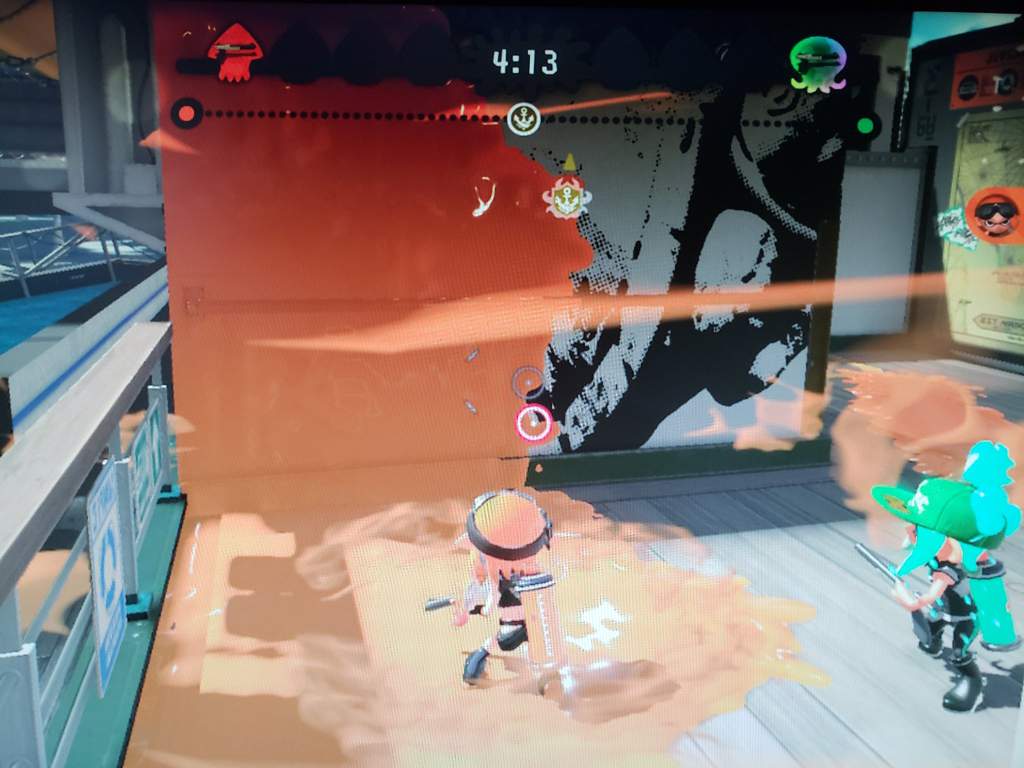 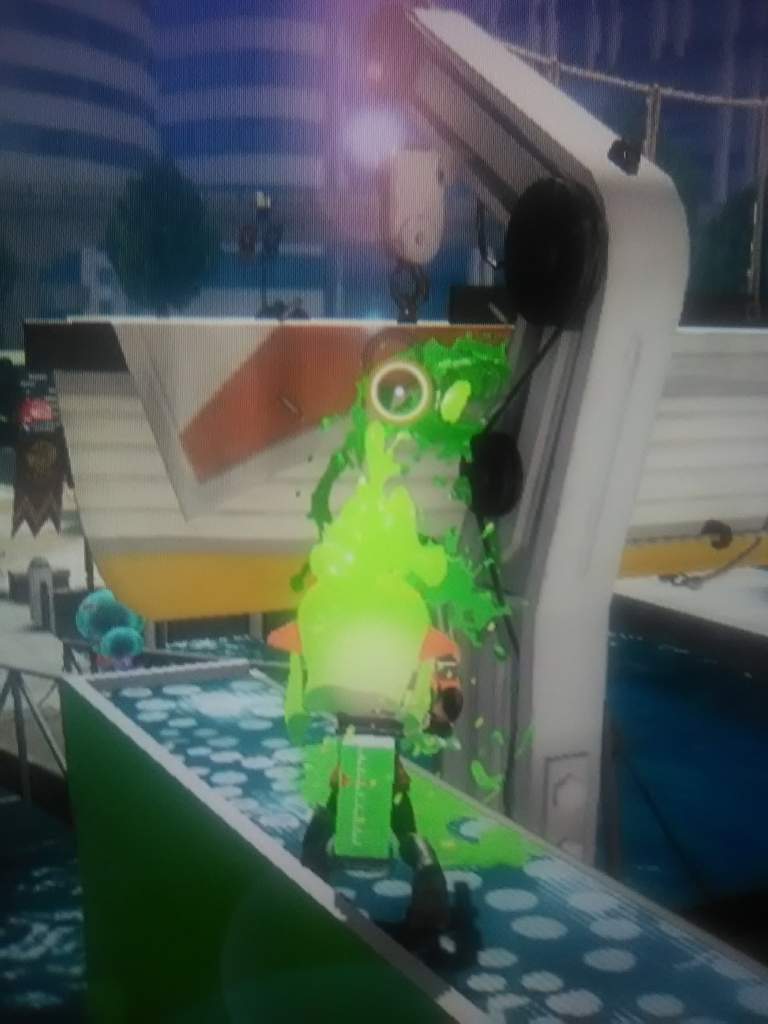 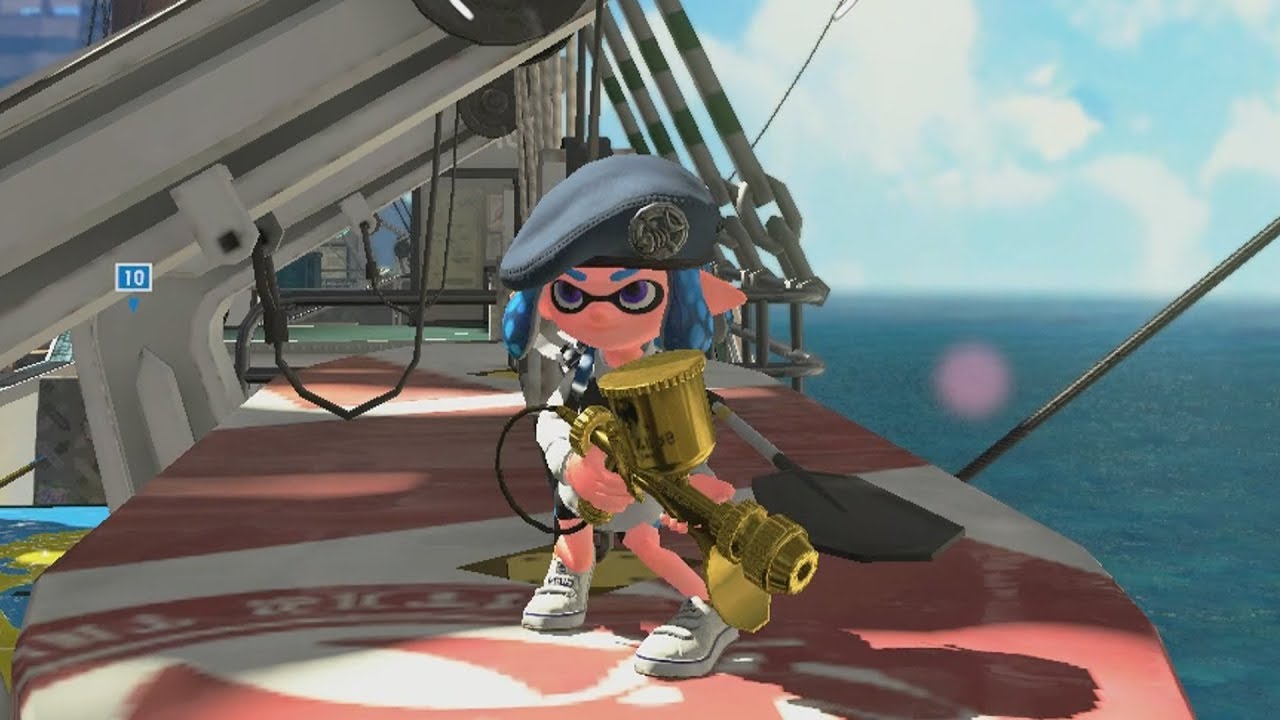 Oh. My. Cod. This one is soooo much fun!!! And it’s pretty easy, too- you just need a little patience and caution. What you wanna do is ink all over the banister immediately to the right (or left, but I prefer thr right) of the Respawn Point. This is best done with what I call rapid-fire weapons, weapons that have a trigger and can ink continuously while holding down the [ZR] button. Be sure to be very thourough, try not to leave any silver/white spaces uninked. The you can either slip through the bars and stand up on the other side, or swim up the side of the support beam and try to stand on top of the bannister. You can even swim all the way up to the top of the support beam, bonk your head, then let yourself fall forward so that you land on the railing on the other side (a lot harder to do but I have done it before in Regular Battles). Also, sorry for the poor-quality image on this one. 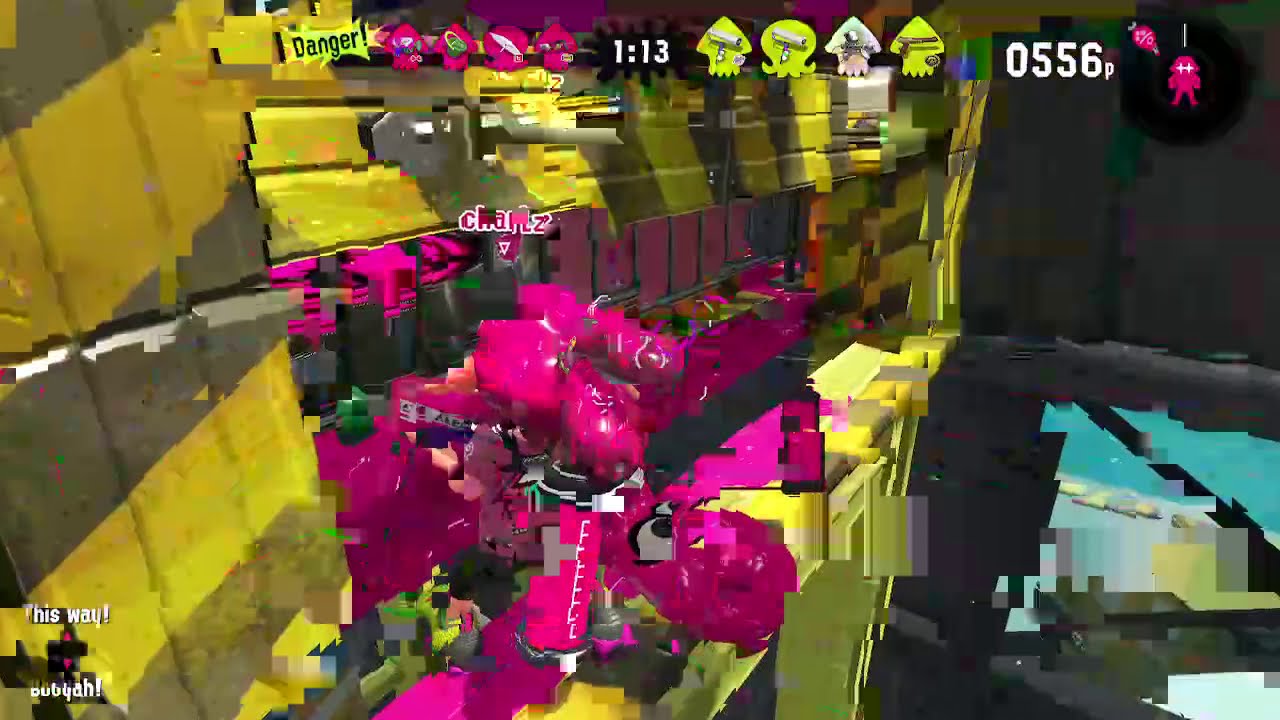 So these aren’t all really glitches in this section, but just ways to mess around with the Octarians in the Hero Campaign Mode for fun. The first one is really easy and funny, and can be used to get Mini Octostomps and Octotroopers in particular out of the way without splatting them *wink*! The second one is just Squee-G’s losing their friggin minds. (Gah, I love Squee-G’s! >w<)
Part 1a: The first one, taking care of Octtotroopers without violence, is really simple. Just walk towards the Octotroopers while dodging their projectile slime balls, annd they will instinctually move backwards. You can do this to the edge of the platform, to the point where they simply slide right of the platform. Wheeeeeeeeeeeee~
Part 1b: The other version of this is with the Mini Octostomps. Basically, all you have to do is throw a bomb over the edge of the platform but in sight of the Mini Octostomp, then hide ASAP so the lil Octostomp goes after the bomb instead. (Don’t worry, it’s far more humane and fun to watch than shooting ‘em.) I have done this because I hate shooting the poor lil guys in the back after they faceplant just trying to say hi to ya.
Part 2: aaaaand now it’s time for, “Squee-G’s Losing Their Minds!” Yep that’s right folks, I’ve got Squee-G glitches here too! I’m not really sure how it happened, but one time I was doing the very first Squee-G level in the Hero Mode, and I came across this bizarre scene where the Squee-G and an Octotrooper simply kept chasing each other around in a circle! The best part is that when I left my game open to take a shower, I returned maybe a half hour or so later and saw that they were still at it! I left my game open an hour longer and it was exactly the same.
And then theres the glitch where the Squee-G goes around and around in circles around the Octotrooper who just sits there frozen in terror~
(Man, Squee-G’s are so precious UwU)