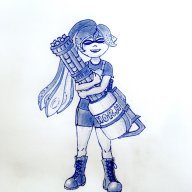 I thought it'd be fun to have a thread to discuss and debate some headcanons or other ideas we've come up with for ourselves to explain how this weird world of Splatoon works. There was an old thread that did pretty much the same thing, but it's kinda dead, so maybe this will kick up discussion.

As for my own headcanon, I think Inklings become adults at 14 when they're able to fully transform (on average). They just grow up faster than Humans. I'd even be willing to wager they set 14 as the legal age of suffrage/consent in whatever society Inkopolis is located.

Think about it, the celebrities we know like the SS and OTH are usually stated to be older than the player character by years. But they never actually look older whilst a Human at 14 is only just starting puberty. And we've never seen Inkling 'adults', we just assume they exist based on the squid/kid terminology. In world though, evidence seems to point towards the player character being as mature as Inklings ever appear.

They might even have a shorter lifespan in general judging by how young both the average Inkling and the general population seem compared to Humans. (not sure how to rectify that with Cap'n Cuttlefish though, but he may just be the exception judging by the distinct lack of other 'senior' Ink/Octolings) Based on what we can actually observe, I think the more rational assumption is that they just use the term 'kid' in place of 'humanoid'.

Interesting theorey thing. Never though of it that way.

Since a new headcannon thread has shown up, I'll just put in a new headcannon I just came up with. Jellyfish in the Splatoon world don't have genders, but they are still referred by male or female pronouns since it's more polite to not call someone an it. The jellyfish doesn't have genders because they split to reproduce.
Last edited: Oct 17, 2018

That actually makes a surprising amount of sense. I should probably think about Jellies more often to be honest XD.

Emperor in coroika has red eyes, there's a disease that's very similar. I am personally wondering how inklings get ill/die (sorry if I'm a bit morbid) like is there disease or do they die of old age or murdered?
Last edited: Dec 19, 2020

Prinz the Overlord said:
Emperor in coroika has red eyes, there's a disease that's very similar. I am personally wondering how inklings get ill/die (sorry if I'm a bit morbid) like is there disease or do they die of old age or murdered?
Click to expand...

People say that there is adult inklings, I dont think there is. Cap is a cuttle fish so he doesn't count. The oldest inkling is Emperor (inklings start turf war at 14 and he has been in an annual event 4 times, so hes 18 or 17) or Pearl. I think they either A) die young or b) just dont bother. I feel the earlier is true and they want to celebrate the rest of their short lives. Woah this is dark
The real reason that they do turf war is that they can find happiness in all the bleakness and thought that they will die soon. But the question is... what do they die of?
Last edited: Dec 19, 2020

Cepholo said that there were microbes so disease is probable. As confimed in the manga, inklings can have allergies. We never hear otherwise about illness in splatoon. Are they possibly immune to our diseases but have their own? Or do they share the same as us? Considering that they are basically just ink, i don't know and it doesn't seem like Nintendo to tell us.

Furthering this, they have face masks that may or may not be used for medical reasons. Though they may just be for fashion reasons.

Another question on my mind is if inklings in splatfest art and in the manga have tounges then why don't they in game ? Can they only eat certain food or they eat food not dissimilar to human food.
Last edited: Dec 20, 2020

I headcanon that some Inkling/Octoling (in other words, not the idols) tentacles and eyebrows change color with their mood, kind of like a mood ring. They don't change in matches, though, so as to keep things as fair as possible.
Last edited: Sep 30, 2021
F

How do all those platform float? What are those blue circles under them. Is it some magnetic force? 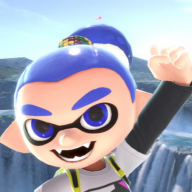 Whenever I go on recon in Splatoon 3, I like to imagine the recon goldfish driving a bus to take us there 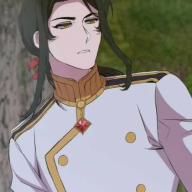 my headcanon is that inklings and octolings need to be linked to a spawn or else they wont respawn and they will just die or respawn at the nearest spawn.

Unless it's said otherwise by Nintendo (not with artwork either, just words), there are tentacle Octarians living in Splatsville alongside Inklings and Octolings. We don't see them in-game is because of the same reason why we don't see any other sea creatures in the same capacity that Inklings, Octolings, and Jellyfish are seen.
You must log in or register to reply here.