IC - The Unique Ones

The sun peaks over the horizon, starting a new day in inkopolis. You wake up to your alarm going off at 10:00AM sharp. You stretch and take a minute to wake up before getting ready for the day. An alert goes off on your squidphone that you have a match at 11:00AM. Finally you walk out and start a new day in Inkopolis.

You know the rules, now let’s get started! It all starts when your character steps out the door and makes their way to inkopolis. This is just character development time. Do whatever you want!

Coral exits his house after having breakfast with Clam whom he shares the house with. He remembers the news that his brother told him about over at breakfast. Coral being happy for his brother Clam to have been accepted for a job at Ammo Knights. In fact, Coral is happy that Octarians of all kinds can live in Inkopolis and roam in it without anyone thinking the city is being invaded. Coral checks his octopus-shaped phone and realizes that he has a match at 11:00 AM that he didn't want to miss, although, his girlfriend Kelp told him that she might come if she isn't busy helping her sister overcome her anxiety of being an Octobomber in Inkopolis. "Time to see what Inkopolis Square has to offer for today, maybe I'll see my brother at Ammo Knights once I get there.", he said with a smile before Super Jumping to the said square.

Before he went into the tower to start a match, Coral went to check out Ammo Knights to see what new weapons might be in development for ink battles, as he entered the store, not only did he see Sheldon tinkering with weapons, he also saw Clam arranging parts for a new Splatling weapon so it could be built. Before Coral could speak to his brother, Sheldon came up to him to ask him what he wants to buy. "What fresh new weapon are you looking to use for Turf Wars today?" Sheldon asks, but Coral replies "I'm just here to see how Clam is doing so far.", upon hearing that, Clam went over to see Coral. "Coral! I'm glad you came over to visit me on your way to Deca Tower! Is Kelp going to join you for a match today?" he asks. Coral replies "I don't know, she might be busy helping her sister getting used to Inkopolis, you know, a completely different environment than Octo Valley and all that." to which Clam says "I hear that, being an Octotrooper myself, I know that my appearance alone would raise a few eyebrows from old generations, but I'm positive that's because of the acceptance being a new thing in Inkopolis."

After talking to each other for a few minutes, they part ways temporarily, Clam remaining in the store and Coral waiting at Deca Tower for people who are interested in being part of his team for the match.
Last edited: Aug 28, 2019 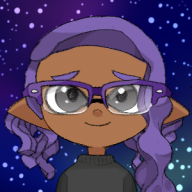 Aisa wakes up with a start the moment her alarm went off. It was a little bit of fumbling before she managed to turn it off. When had she set that? Right that one time she stayed up all night and slept til 3. Her eyes actually opened after she turned off the alarm. Now why were the lights on.. nope that was just her. She stretched and then proceeded to bounce out of bed. She rushed through her morning routine (if it could be called such), before noticing she has a game at 11. And it was a quarter till.... oh dear.

Aisa ran out the door, barely remembering to grab her weapons and phone. She ran over to crusty sean, paying for her breakfast, while simultaneously tying her hair up. She ran as fast as she could over to Deca tower. Ten minutes to spare. Ten? Eh, maybe she didn't read the clock right. She began to eat her breakfast while waiting for the match to start.

Holi glides out of her apartment at 10:00 sharp, starting her long walk to the tower. “Well look who it is” A voice comes from behind her. She takes a deep breath before turning and confronting her shade. “What now. I’m already on my way to the tower.” She says as if a shadowy version of herself is normal. “Oh nothing much, just reminding you that you are worthless.” Holi sighs before continuing on, as these taunts are regular to her.

She walks in 15 minutes before her match starts and sits down on the floor. She pulls out a small butterfly knife and begins flipping it mindlessly. She doesn’t notice the other people walk in. “Why do you still carry that around? It’s as useless in a fight as you are.” Her shade taunts. “Because it’s mine, ok? Now bug off.” She says. The shade smirks and smacks it out her hand and onto the floor. She grabs it off the ground and turn on the shade throwing it at it. The knife phases through it and buries itself in the wall. “Hah! You missed!” She takes a deep breath before marching over to the wall and yanking it out, aware of the stares she’s attracting.

As he was waiting inside the Deca Tower, Coral immediately noticed a thrown knife that almost cut off one of his tentacles. He barely dodged it to keep his tentacles from being accidentally cut, "Woah!", he exclaimed, "For a second there, I thought I would've become a father accidentally.", he then noticed an Inkling who was flustered picking up that knife from the wall, she seems to talk to nothing. Confused, he went to her and ask what's wrong, "Is there anything troubling you? I saw that you yelled at no one."

(The last quote is Coral talking to Holi, btw. Changed the place where he was standing so it would make sense.)
Last edited: Aug 29, 2019

Holi glances at him and shakes her head. “Sometimes I have to release my inner demons, so to speak.” She chuckles at him for not knowing how true that statement is. “Nice save knucklehead. That’s not suspicious at all. ” She shoots her shade a look before sitting back down. “Hey. When’s your match?” She asks Coral.

Coral responds, "I have a match at 11 AM.", Coral then explains how it was close for him to be a father after he has remembered a sentence explaining Octarian reproduction, "That knife almost cut my tentacle off, and cut-off Octoling tentacles do become their own beings, so I'm preventing mine from being cut off accidentally. It's this reason why I don't go to typical barbershops to keep my tentacles the same length."

After his explanation, he asks "What's your name? Mine is Coral."

She nods. “Holi. And I also got a match at 11. Guess I’ll see you on the field, whether that be friend or foe. “ She looks him up and down. “You look fit. You should be a good teammate. Probably in the A ranks for ranked mode.” “Weapon main...” She tilts her head to the side.”I don’t really know.” She nods once more before continuing. “Take care and watch those tentacles of yours, yeah?” “It would be such a shame is something happened to them...” Her shade comments on the side. She glances at the shade before waiting to present her next question. “There’s something about them...” she mutters to herself.

Coral then shows her his Octo Shot, "This is my main, the Octo Shot. Before I got to do many Ranked and Turf War matches, I was already using it in previous battles I had to be part of. It's basically a no brainer that I got used to battling daily.", after talking, he adjusts the band tying his tentacles together by just using said tentacles.

“Octoshot. Not bad. It seems there is more to your story, something that you need to hide...” she shrugs. “Eh, I’ll figure it out later.” She looks at her watch. “Speaking of later, where is our other teammate? They should be here by now...”

"Well, I'm not from Inkopolis, that's the extent that I will tell you for now." after he said that, he looks at his phone, "Gees, I've gotten used to waiting for the right moments, but not when I don't know the exact time that the person we need would arrive."

"Oops, My cod- I'm so sorry. I think I lost track of time- Wait you guys are waiting on a teammate and have a match at 11 right?" Aisa stated this is half a breath, the words almost to fast to catch before slowing down and trying again. "I overheard you guys and I think I'm the team you're waiting on?"

Coral notices Aisa, "Looks like you're the teammate that we were waiting on since we all play at the same time."

Holi nods. “Cmon, match is starting soon. We better get to the spawn.” She motions for them to follow and starts walking, hoping to learn more on the way.

Coral hurries to the Spawn Point so he can get there on time, "Gees, the only other time I needed to hurry up this badly was when debris was falling all around me as I tried to get to the surface!"

(Foreshadowing? :O)
“So, new person, who are you and what’s your main.?” She asks while walking quickly.”

(Could be foreshadowing something in the future.)

"Aisa, I main dark tetra dualies most of the time. Sometimes I use an aerospray." Aisa says pulling out the aforementioned weapons and hurrying to the spawn point.

(Sorry for the break I needed to focus hard on some work for classes.)
Holi raises a eyebrow. “How long has you been battling for? Same as everyone else?” She nods to Aisa. “The question is directed to you too.”

@Cephalobro @GamerKitty205
You must log in or register to reply here.