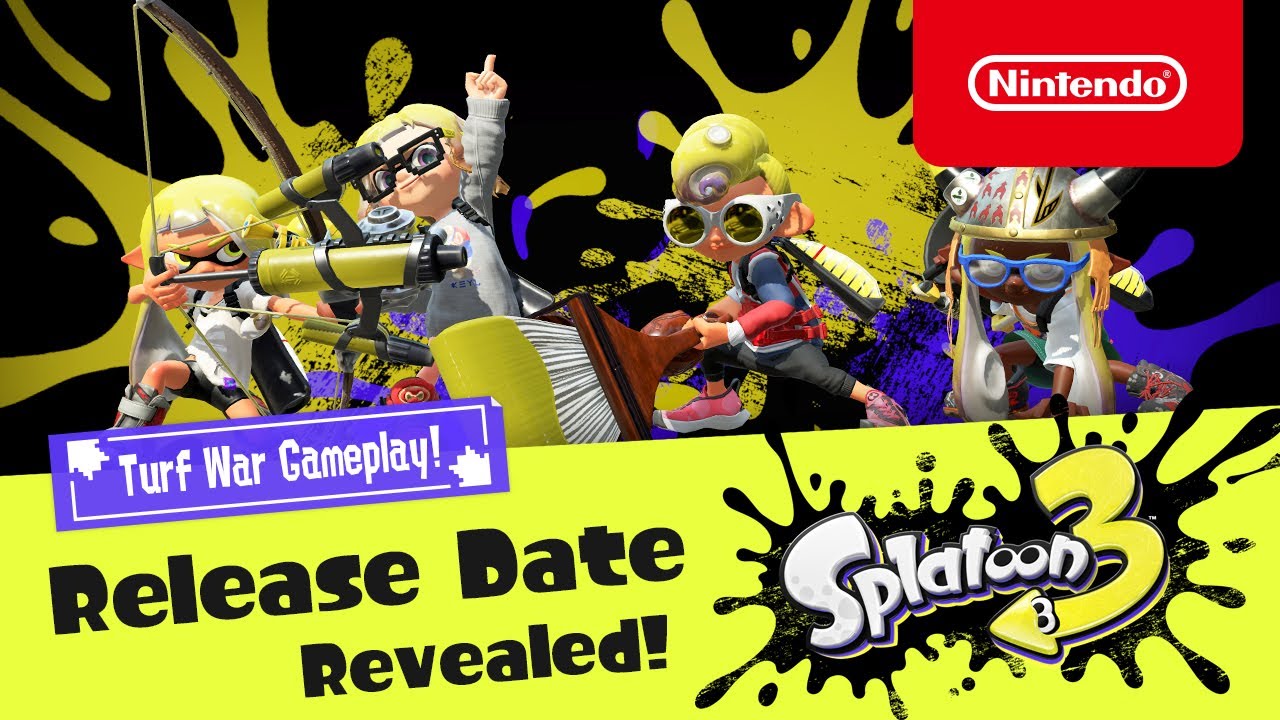 INKoming! Nintendo’s surprised fans today with a new trailer and release date for Splatoon 3. The trailer showcases one full round of Turf War in new map Eeltail Alley, revealing some interesting features we can expect to see in the game’s approaching release.

The match begins and already a new feature is seen, namecards! As the Turf War rules are displayed, players’ usernames are shown on both sides with patterned backgrounds and titles reminiscent of those given to Splatfest squads in Splatoon 2. The titles have similar vocabulary to the personal titles players could gain during Splatfests in both S1 and S2, such as Champ (Champion) and Superfan (Fanboy/Fangirl), though it is unknown if this has any significant meaning. It’s impossible to determine how they will function at the moment, but it can be theorized they will be customizable in a similar vein to the mix-and-match titles in Animal Crossing: New Horizons (a game which shares a portion of its development team with Splatoon 3) or they may automatically adjust depending on your playstyle, like the Splatfest titles of old.

Along with the new title feature, new specials are seen in action! Some have already been thoroughly revealed, like the Zipcaster and Crab Tank, but we are only now getting a good look at others. Notable specials featured in today’s trailer include the returning Inkstrike and Inkzooka as well as a brand new vacuum special. The Inkstrike and Inkzooka are modified into mini versions of their old selves, the Inkstrike now functioning as 3 small “bombs” that can be thrown to release small inkstrikes and the Inkzooka being able to shoot 3 small bursts per special. The new vacuum special creates a suction tornado, sucking up all enemy ink fired in its path and launching the ink back to the enemy team.

Finally, the match ends and shows the last new feature, medals! Players are awarded these based on the events of the match, with medals like “#1 Popular Target” and “#1 Enemy Splatter”. It’s possible that the medals will play into the aforementioned title feature, but their purpose is currently unknown.

Splatastic, right? Fortunately, Splatoon 3 seems to be sticking to the tail-end of its promised release date, with it being announced to release on September 9th. Not the summer date most have envisioned, but still within the last month of the season. Trust me, I googled it!

Clocked out turf warrior: This one probably is tied to hours in turf war, though this could also be tied to the amount of turf covered in the final moment of turf war
Splatville Fashioniesta: likely an early game achievment for purchase a certain amount of gear pieces
Big- Money Man-o-war regular: tied to either a certain brand of gear or more specifically amount of money spent towards gear in a specifc shop
Attention Seeking Bass dropper: This achievement scheme and pun tells me it is tied to Salmon run but as to what idk
C-side Superfan:
Cside is one of the new bands...possibly tied to a music game like in S1 or some other music theme addition to the game (jukebox to listen to S3 tunes possibly)
Inkless office drone: Think this is tied to completeing a level in hero mode without using ink
You must log in or register to reply here.